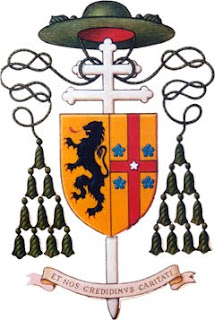 …It is significant that Rome choose this forty one year old ex-missionary for the capital of French West Africa, whose diocesan structure was finally emerging. We must conclude that they found “a job that was big enough” for him, to use the words of Cardinal Lienart. In addition to the qualities listed in Canon 331, the future Bishop also had a gift for organization and was a genius when it came to material and practical matters. His only fault was stubbornness. When this point was raised, it was noted that tenacity was a virtue (as seemed to be the case with Marcel Lefebvre) when sound doctrine was at stake.


… It was finally decided that the consecration would take place in his family’s parish church in Tourcoing. In Tourcoing, as in Mortain where the community had held a celebration for him on July 6 1947, he began to notice the marks of respect now shown towards him and to feel the distance this created between him and his friends. According to his sister Christiane, however he did not behave differently since he loved simplicity and good friendship too much. At Lophem-les-Bruges where he went for a few days on retreat at the monastery of his cousin, the famous liturgist Dom Gaspard Lefebvre, the monks insisted on seating him on a conspicuous throne. He objected: “But I have not ye been consecrated Bishop!” “On the contrary, you are a bishop-elect, and that is sufficient.”

…He meditated on his favourite words from St John which he had chosen for his Episcopal device, “Et nos credidimus caritati” Yes he said we have believed in the great charity that God and Our Lord has for us….

On the coat of arms of the elected Bishop, the congregation’s emblem appeared on the left above the “African memory” – the future cathedral of Dakar – while on the right “on a gold background stands a red cross with a six pointed star and four five petal azure flowers – the arms of his great uncle Pierre Lefebvre, a burgher of Tournai, dating from 1690. Be that as it may the Archbishop also saw in these symbols Our Lord’s cross steeped in blood, the cross of the crusade for His reign which is based on the gold of God’s charity and supported by the universal mediation of our Lady.

For the fifth time he took the anti-modernist oath with his hand on the gospels, affirming with conviction “ I firmly hold, then, and shall hold to my dying breath the belief of the Fathers in the charism of truth, which certainly is, was and always will be in the succession of the episcopacy from the apostles. The purpose of this is, then, not that dogma may be tailored according to what seems better and more suited to the culture of each age; rather, that the absolute and immutable truth preached by the apostles from the beginning may never be believed to be different, may never be understood in any other way.” 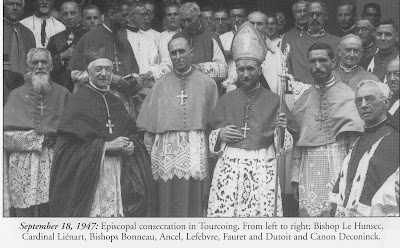 He received the fullness of the priesthood on September 18 1947 in the church of our Lady in Tourcoing.

from the biography of Marcel Lefebvre by Bernard Tissier de Mallerais
emphasis is ours not from the original.
Posted by just me at 16:27