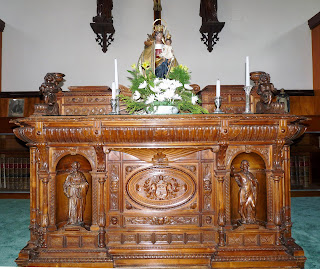 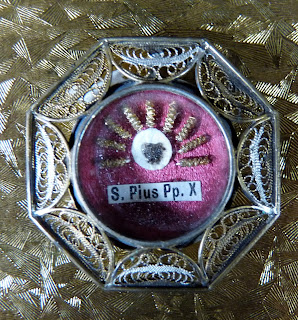 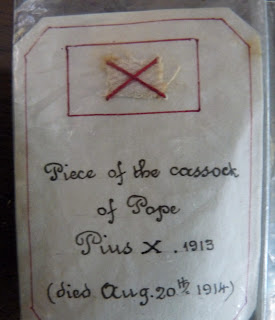 For the seminarians of SSPX
Program of the year of spirituality

….Without this spiritual training, as Archbishop Lefebvre explained, “we would risk making the seminary a place for purely intellectual studies. We would train heads but not always hearts…hearts which are made to grow in sanctity and to live an interior life of intense union with Our Lord”.

A Special course the acts of the Magisterium

…Archbishop Lefebvre himself taught this subject as he explained:

The aim of this course is not so much to make a logical study of such errors, but rather to go over the encyclicals themselves and especially those in which the Popes have given an in-depth study of the truths opposed to these errors, or a detailed analysis of the errors themselves. On can only admire the zeal and faith of these watchful guardians of the deposit of the Faith, and it is all the more stupefying to note that this relentless fight was suddenly abandoned through a false ecumenism amounting to a betrayal of the truth, in favour of making pacts with the authors of these errors and the inheritors of their ideas.

The course is introduced through St. Pius X’s papal agenda: “To restore all things in Christ” (E Supremi Apostolatus) 1903 the first year of the pontificate of Pius X. 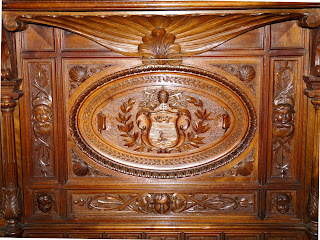 When all this is considered there is good reason to fear lest this great perversity may be as it were a foretaste, and perhaps the beginning of those evils which are reserved for the last days; and that there may be already in the world the "Son of Perdition" of whom the Apostle speaks (II. Thess. ii., 3). Such, in truth, is the audacity and the wrath employed everywhere in persecuting religion, in combating the dogmas of the faith, in brazen effort to uproot and destroy all relations between man and the Divinity! While, on the other hand, and this according to the same apostle is the distinguishing mark of Antichrist, man has with infinite temerity put himself in the place of God, raising himself above all that is called God; in such wise that although he cannot utterly extinguish in himself all knowledge of God, he has contemned God's majesty and, as it were, made of the universe a temple wherein he himself is to be adored. "He sitteth in the temple of God, showing himself as if he were God" (II. Thess. ii., 2).


…6. Verily no one of sound mind can doubt the issue of this contest between man and the Most High. Man, abusing his liberty, can violate the right and the majesty of the Creator of the Universe; but the victory will ever be with God - nay, defeat is at hand at the moment when man, under the delusion of his triumph, rises up with most audacity. Of this we are assured in the holy books by God Himself. Unmindful, as it were, of His strength and greatness, He "overlooks the sins of men" (Wisd. xi., 24), but swiftly, after these apparent retreats, "awaked like a mighty man that hath been surfeited with wine" (Ps. 1xxvii., 65), "He shall break the heads of his enemies" (Ps. 1xxvii., 22), that all may know "that God is the king of all the earth" (Ib. 1xvi, 8), "that the Gentiles may know themselves to be men"(Ib. ix., 20).

…This being so, Venerable Brethren, of what nature and magnitude is the care that must be taken by you in forming the clergy to holiness! All other tasks must yield to this one. Wherefore the chief part of your diligence will be directed to governing and ordering your seminaries aright so that they may flourish equally in the soundness of their teaching and in the spotlessness of their morals. Regard your seminary as the delight of your hearts, and neglect on its behalf none of those provisions which the Council of Trent has with admirable forethought prescribed. And when the time comes for promoting the youthful candidates to holy orders, ah! do not forget what Paul wrote to Timothy: "Impose not hands lightly upon any man" (I. Tim. v., 22), bearing carefully in mind that as a general rule the faithful will be such as are those whom you call to the priesthood. Do not then pay heed to private interests of any kind, but have at heart only God and the Church and the eternal welfare of souls so that, as the Apostle admonishes, "you may not be partakers of the sins of others" (Ibid.). Then again be not lacking in solicitude for young priests who have just left the seminary. From the bottom of Our heart, We urge you to bring them often close to your breast, which should burn with celestial fire - kindle them, inflame them, so that they may aspire solely after God and the salvation of souls. Rest assured, Venerable Brethren, that We on Our side will use the greatest diligence to prevent the members of the clergy from being drawn to the snares of a certain new and fallacious science, which savoureth not of Christ, but with masked and cunning arguments strives to open the door to the errors of rationalism and semi-rationalism; against which the Apostle warned Timothy to be on his guard, when he wrote: "Keep that which is committed to thy trust, avoiding the profane novelties of words, and oppositions of knowledge falsely so called which some promising have erred concerning the faith" (I. Tim. vi., 20 s.). This does not prevent Us from esteeming worthy of praise those young priests who dedicated themselves to useful studies in every branch of learning the better to prepare themselves to defend the truth and to refute the calumnies of the enemies of the faith. Yet We cannot conceal, nay, We proclaim in the most open manner possible that Our preference is, and ever will be, for those who, while cultivating ecclesiastical and literary erudition, dedicate themselves more closely to the welfare of souls through the exercise of those ministries proper to a priest jealous of the divine glory. "It is a great grief and a continual sorrow to our heart" (Rom. ix., 2) to find Jeremiah's lamentation applicable to our times: "The little ones asked for bread, and there was none to break it to them" (Lam. iv., 4). For there are not lacking among the clergy those who adapt themselves according to their bent to works of more apparent than real solidity - but not so numerous perhaps are those who, after the example of Christ, take to themselves the words of the Prophet: "The Spirit of the Lord hath anointed me, hath sent me to evangelize the poor, to heal the contrite of heart, to announce freedom to the captive, and sight to the blind" (Luke iv., 18-19)

From Biography of Marcel Lefebvre by Bernard Tissier de Mallerais and the papal encyclical referred to.