The three Great Gifts of God 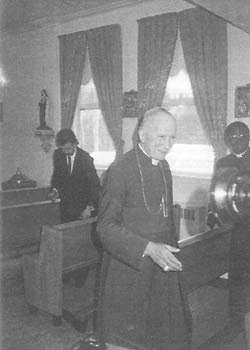 ...Is it not true that we today are in a certain sense in captivity, restraint surrounding us on all sides, imposed on us by those who bow to error both in the world and inside the Church itself? By those who juggle with the truth and who keep truth hidden instead of proclaiming it; We are in a world enslaved by the Devil, enslaved by error.
But it is our wish to hold to truth. We want to con¬tinue to proclaim it. What then, is this truth? Do we have a monopoly on it? Are we so presumptuous as to say we have the truth, others do not? No, truth does not belong to us. It does not come from us, it was not invented by us. This truth was transmitted to us, it was given us. It is written. It is living in the Church and in the whole history of the Church. This truth is known. It is in the books, in the catechisms, in all the acts of the councils, in all the acts of the sovereign pontiffs. It is in our Creed, in our Ten Commandments, in the gifts that God has made to us, the Holy Sacrifice of the Mass and the Sacraments. It is not we who invented this truth. We have only to persevere in it.
Because truth has an eternal character. The truth we profess is God, Our Lord Jesus Christ who is God and God does not change. God remains immutable. It was St. Paul who said, vicissitudinis obumbratio. There is not a shadow of vicissitude in Him, not the shadow of changeability. God is unalterable, semper idem, always the same. Certainly He is the source of every¬thing that changes but He, Himself, is unalterable, unchangeable. And by the fact that we profess God as truth we will enter in some way into eternity through truth. We have no right to change that truth. Indeed it cannot be changed. It will never change.
Men have been put on earth to receive a little of that light of eternity as it descends on them. They become in some way eternal, they too, immortal, according to the extent to which they attached themselves to the things that change, to moving things, they move away from God. And here it is that we feel a need. All men feel this need. They have in them an immortal soul which is al¬ready now in eternity, a soul which will be happy or unhappy, but it is a soul that exists. It will not die.
Every man who is born, who has a soul has entered into eternity. That is why we have need of eternal things, of the true eternity which is God. We cannot do without it. It is part of our lives. It is what is most es¬sential to us. That is why men seek the truth, seek the eternal, because they have an essential need of eternity.
And what are the means by which Our Lord has given us eternity, communicated it to us, made eternity enter into our lives even here below? Often when I was going through the African countries on my diocesan visits I chose a them that was dear to me and very simple, too. You have heard it many times but for the simple people I spoke to it summed up the truth. Ask¬ing what are the gifts the Good God has given us which make us participants of the divine life, life eternal, I would answer: there are three great gifts which God has made us and they are the Pope, the Blessed Virgin and the Eucharistic Sacrifice.


THE PAPACY
In reality it is an extraordinary gift that God has made us in giving us the Pope, in giving us the suc¬cessors of Peter, giving us precisely this perpetuity in truth communicated to us through the successors of Peter, that must be communicated to us through them. And it seems inconceivable that a successor of Peter could fail in any way to transmit the truth that he is obliged to transmit. Indeed, without virtually disappearing from the line of succession he cannot fail to communicate that which the popes have always communicated, the Deposit of Faith which does not belong to him alone.
The Deposit of Faith does not belong to the Pope. It is the treasure of truth which has been taught during twenty centuries. He must transmit it faithfully and exactly to all those under him who are charged in turn to communicate the truth of the Gospel. He is not free.
But should it happen because of mysterious circum¬stances which we cannot understand, which baffle our imagination, which go beyond our conception, if it should happen that a pope, he who is seated on the throne of Peter, comes to obscure in some way the truth which it is his duty to transmit or if he does not transmit it faithfully or allows error to darken truth or hide it in any way, then we must pray to God with all our hearts, with all our soul, that light continues to be thrown on that which he is charged to transmit.
NEVER CAN THE TRINITY BE CHANGED.
NEVER CAN THE REDEMPTIVE WORK OF CHRIST THROUGH THE CROSS AND THE SACRIFICE OF THE MASS BE CHANGED!
THESE THINGS ARE ETERNAL.
THEY BELONG TO GOD.
And we cannot follow error, change truth, just be¬cause the one who is charged with transmitting it is weak and allows error to spread around him. We don’t want the darkness to encroach on us. We want to live in the light of truth. We remain faithful to that which has been taught for two thousand years. That what has been taught for 2,000 years and which is part of eter¬nity could change is inconceivable.
Because it is eternity which has been taught to us. It is the eternal God, Jesus Christ eternal God, and everything which is centered on God is centered on eternity. Never can the Trinity be changed. Never can the redemptive work of Christ through the Cross and the Sacrifice of the Mass be changed. These things are eternal. They belong to God. How can someone here below change those things? Who is the priest who feels he has the right to change those things, to modify them? Impossible!
When we possess the past we possess the present and we possess the future. Because it is impossible, I say metaphysically impossible, to separate the past from the present and future. Impossible! Then God would no longer be God! God would no longer be eternal! God would no longer be immutable. And there would be nothing more to believe in. We would be completely in error.
This is why, without worrying about all that is happening around us in these times we ought to close our eyes to the horror of this drama we are living through, close our eyes and affirm our Creed, our Ten Commandments, meditate on the Sermon on the Mount which is also our law. We must attach ourselves to the Holy Sacrifice of the Mass, to the Sacraments awaiting the light that will shine around us again. That is all. We must do this without becoming bitter or vio¬lent in a spirit that is unfaithful to Our Lord. Let us stay charitable. Let us pray, suffer, accept all the trials, everything that happens, everything that God sends us. Let us do as Tobias did. Abandoned by everyone as they went to adore the golden calf of the gods of the pagans, he remained faithful. Still, he too could have thought that, since only he remained faithful it might be that he was mistaken. But no, he knew that whatever God had taught to his forebears could not change. The truth of God existed and could not change. And so it is with us. We too have to rely upon the truth that is God yesterday, today and tomorrow. Jesus Christus heri, hodie et in secula.
And that is why I say we must retain our confi¬dence in the papacy. We must retain confidence in the successor of Peter in so far as he is the successor of Peter. But if it should happen that he were not perfectly faithful in his duties, then we must remain faithful to those who were the successors of Peter and not to him who is not the successor of Peter. That is all. His duty is to transmit the Deposit of the Faith. 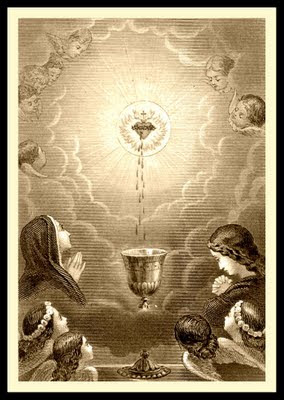