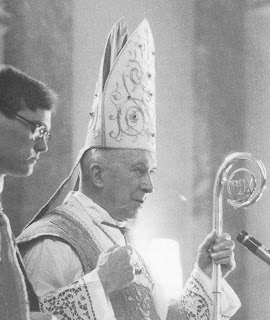 God raised up the Priestly Society of St. Pius X for the maintenance and perpetuity of His glorious and expiatory Sacrifice within the Church. He chose Himself some true priests instructed in and convinced of these divine mysteries. God bestowed upon me the grace to prepare these Levites and to confer upon them the grace of the priesthood for the continuation of the true Sacrifice according to the definition of the Council of Trent.

This is what has brought down upon our heads persecution by the Rome of the anti-Christs. Since this Rome, Modernist and Liberal, is carrying on its work of destruction of the Kingdom of Our Lord, as Assisi and the confirmation of the Liberal theses of Vatican II on Religious Liberty prove, I find myself constrained by Divine Providence to pass on the grace of the Catholic episcopacy which I received, in order that the Church and the Catholic priesthood continue to subsist for the glory of God and for the salvation of souls. That is why, convinced that I am only carrying out the holy will of Our Lord, I am writing this letter to ask you to agree to receive the grace of the Catholic episcopacy, just as I have already conferred it on other priests in other circumstances. I will bestow this grace upon you, confident that without too long a delay the See of Peter will be occupied by a successor of Peter who is perfectly Catholic, and into whose hands you will be able to put back the grace of your episcopacy so that he may confirm it.

I beseech you to remain attached to the See of Peter, to the Roman Church, Mother and Mistress of all Churches, in the integral Catholic Faith, expressed in the various creeds of our Catholic Faith, in the Catechism of the Council of Trent, in conformity with what you were taught in your seminary. Remain faithful in the handing down of this Faith so that the Kingdom of Our Lord may come.

Finally, I beseech you to remain attached to the Priestly Society of St. Pius X, to remain profoundly united amongst yourselves, in submission to the Society's Superior General, in the Catholic Faith of all time, remembering the words of St. Paul to the Galatians (1:8-9): "But even if we or an angel from heaven were to teach you a different gospel from the one we have taught you, let him be anathema."

As we have said before, now again I say: "if anyone teaches you a different gospel from what you have received, let him be anathema." My dear friends, be my consolation in Christ Jesus, remain strong in the Faith, faithful to the true Sacrifice of the Mass, to the true and holy priesthood of Our Lord for the triumph and glory of Jesus in heaven and upon earth, for the salvation of souls, for the salvation of my own soul.

In the hearts of Jesus and Mary I embrace you and bless you. Your father in Christ Jesus,
+ Marcel Lefebvre, feast of St Augustine 29 August 1987.


Footnote - extracts from an interview with Bishop Fellay 2009

Q, Regarding these websites you mention, there is a sedevacantist website which, I was told, quotes Archbishop Lefebvre speaking to then Cardinal Ratzinger: “Even if you give us everything we want—a bishop, canonical agreement—we may not collaborate with you because you do not accept the doctrine of Christ the King.” Can you clarify this quote?

A. Bp Fellay. Archbishop Lefebvre said this in a conference to seminarians. He related a conversation he had with Cardinal Ratzinger in the summer of 1987. They were already discussing the episcopal consecrations. What is very interesting is that, after this meeting where the Archbishop said these things, he sent a letter to the new bishops-to-be, saying Rome was occupied by anti-Christs. This was also the summer of 1987. After all of this, he himself accepted and requested a canonical visitation from Rome. He envisaged discussions which happened in April 1988. These quotes must be taken in their context. It is a common practice today to make everything an absolute, without circumstances. If you go down this road, you can make anyone say anything. It is a kind of intellectual honesty to try to see what he meant, what he said, what he intended when he said that. There is a question of principle here: we have a hard time with Rome. It is still the same problem today. I said to Cardinal Castrillon last year and this year exactly what Archbishop Lefebvre said in 1987: If you want us, you must respect out identity. If you want us to change our identity, it won’t work. Our Lord Jesus Christ is truly Lord. The phrase “Our Lord” means something. He is King because He is God and because all power on heaven and earth was given to Him, even as man. This is a point of faith. There are consequences to ideas like the Kingship of Christ. But if you begin to say, “Well, the State and social life have nothing to do with God. We don’t care about Our Lord,” where is the Kingship of Christ? If He is King, He cares about His powers and He wants them to be observed. This is also a point of faith: we know that every soul appears in front of the Judge, to whom they must give account. This Judge is Our Lord Jesus Christ, the King, not only of Catholics, but of everyone, including heads of State, be they kings or presidents. They will have to give an account of what they have done with their powers entrusted to them by our heavenly King. Even if we have to wait for years, we won’t change the Faith.
Posted by just me at 10:14