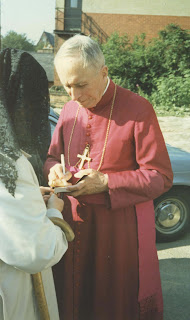 The Archbishop left the motherhouse (he had resigned as Superior General of the Holy
Ghost Fathers in 1968), one simple bag in hand. A French seminarian saw him and asked “Where are you going like that Excellency?”
“I don’t know…”
“Can I be of assistance?”
“Thank you that’s all right”

He found refuge firstly on November 1 at the Institute of the Holy Ghost on Via Machiavelli. A little later, he found a small room at the Villa Lituania on Via Casalmonferrato. It was maintained by the sisters who were attached to the Lithuanian seminary. He bought himself a desk, a wardrobe and some shelving, and he had just enough to pay his rent with the ninety thousand lira he received monthly from the Sacred Congregation for the Propagation of the Faith for his work as a consulter and as president of the commission responsible for catechisms in Africa. It was a role he kept until 1972.

…He could have traveled to Africa to visit the training centres for catechists to which he attached such great importance. But this possibility did not attract him. At sixty-three, and in fact “at the end of his career”, he felt dissatisfied with such meager responsibilities. He felt himself pushed from within, urgently compelled to do other work.

On one hand, as he had told Archbishop Sigaud, he wanted to “dedicate himself entirely to the fight against the progressives through the press, as he had been doing since 1966." On the other hand he still had the idea of an international seminary that he shared with his friend Bishop Morilleau and his confidant, Fr Michael O’Carroll.

“Father O’Carroll” he said to him one day. “If ever I had to leave the congregation, I will found a traditional seminary and in three years I will have 150 seminarians.”

From Biography of Marcel Lefebvre by Bernard Tissier de Mallerais
Posted by just me at 19:02