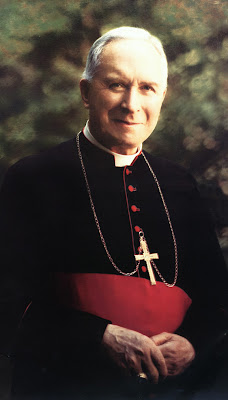 Archbishop Lefebvre, from memory recalls that he sent the following note to the Pope:-

“Most Holy Father
Will your Holiness be pleased to accept the assurance of my respectful veneration? If in my words or my writings certain expressions have displeased Your Holiness, I am exceedingly sorry. I am still hoping that your Holiness will kindly grant me an audience and I assure you of my respectful and filial feelings. Rome 10 September 1976.

…So the next day Saturday, at quarter past ten, I went to Castelgandolfo, and there I really believe the Holy Angels had driven out the Vatican employees because I had come back there. There were two Swiss Guards at the entrance, and after that I encountered only Mgr. X (not Mgr. Y their names are very alike). Mgr. X (the Canadian) conducted me to the lift. Only the lift man was there that is all, and I went up. The three of us went up to the first floor, and there, accompanied by Mgr. X I went through all the rooms: there are at least seven or eight before you come to the Holy Father’s office. Not a living soul! Usually – I have often been to private audiences in the days of Pope Pius XI, Pope Pius XII, Pope John XXIII, and even Pope Paul VI – there is always at least one Swiss Guard, always a gendarme, always several people, a private chamberlain, a monseignor who is present if only to keep an eye on things and prevent incidents. But the rooms were empty – nothing, absolutely nothing. So I went to the Holy Father’s office, where I found the Holy Father with Mgr. Benelli at his side. I greeted the Holy father and I greeted Mgr. Benelli. We seated ourselves at once, and the audience began.

The Holy Father was lively enough at the beginning – one could almost call it somewhat violent in a way; one could feel that he was deeply wounded and rather provoked by what we are doing. He said to me:

“You condemn me, you condemn me. I am a Modernist. I am a Protestant. It cannot be allowed. You are doing an evil work, you ought not to continue, you are causing scandal in the church, etc …” with nervous irritability.

I kept quiet, you may be sure. After that he said to me: “Well speak now, speak. What have you to say. I said to him

To be continued
From Apologia pro Marcel Lefebvre by Michael Davies.
Posted by just me at 17:40