A sermon in which Jesus Christ does not figure is useless ... concluded 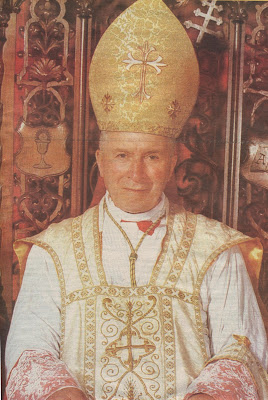 The ardour with which he preaches is so extraordinary that his adversaries exhibit and incredible opposition. The terms used in Holy Scripture are clear: not only are they enraged but “they gnashed their teeth at him”. Truly, through them, the devil himself acted against St Stephen. Consider the ardour and effect of his preaching and of his faith, and the persecution they aroused, obviously he so clearly manifested the Holy Ghost within him that they put him to death. The good God allowed him to enjoy this blessed vision before his death.

The Apostles St. Peter and St. Andrew died on crosses, and the great missionaries went in the name of the cross to preach the Gospel. This what St Francis Xavier did, and St Louis-Marie Grignon de Montfort, and so many others. They held up the Cross to impart the Faith or to revive it. The Cross has its own virtue. The good God has willed that the cross be the salvation for all men. Consequently, one must believe that in every man there is a predisposition to believe in the virtue of the Cross. I have experienced this in the course of my missionary life in pagan villages. When the Cross was shown to the villagers and when what it was explained, an actual grace descended into souls. The souls were touched at the thought that God came upon earth, suffered for them, and shed His Blood to redeem them from their sins.

Men full of pride and steeped in their knowledge are the hardest to convert. At the idea of adoring Christ, they revolt like the devil, like the bad angels, like the princes of the priests, like the Scribes and the Pharisees. But simple souls that are undoubtedly in sin more easily recognise their disorder. They are in a situation that quite oft5en creates in them a certain remorse. So the thought that this degrading siutaion in which they find themselves has an exit, a way to resurrection, and light attracts them. When they think that God Himself took the trouble to come and sacrifice Himself to get them out of the state of sin into which they had fallen, then souls rise up and thank God, seeing that salvation is possible, resurrection is possible.