… Some of his seminarians compared Mortain with its healthy liberty to the rough and tough training in the novitiate. “Here we are at last far from the novitiate!” they would say, In this attitude Fr. Lefebvre detected a loss of fervour, or a loss of focus in spiritual training and in the pursuit of sanctity. The too exclusively intellectual approach adopted by the philosophy students was a serious pitfall. He warned them to beware:

It is not normal; the opposite ought to be the case. After the novitiate, your studies should provide food for your spiritual life and not lessen it. When all is said and done, philosophy understood and loved, leads to God who is present everywhere, incomprehensible in so far as He exceeds our weak intelligence. Here is where the door of faith opens….

Philosophy is a preparation to sanctity and to a life of union with God….True knowledge leads logically to humility: false knowledge which stops along the way, which is incomplete, leads to pride and self-importance. 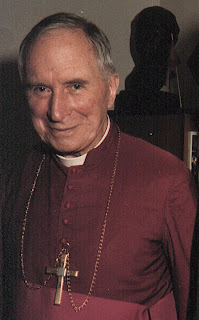 The remedy was readily available: St. Thomas. The Father Superior went through the Summa Theologica in his spiritual conferences. He devised a “triptych of the spiritual life” which he planned to expound over three years and which he later spoke of at Econe:

The first year was given over to the study of the “unjust man” with all the consequences of original sin. The second year covered the “just man” sanctified by grace with his virtues, the gifts of the Holy Ghost, and the beatitudes. In the third year – had I stayed for a third year – I would have explained the means by which man passes from the state on injustice to the state of justice: firstly our Lord himself (His work of redemption) then the means of sanctification that He instituted: the Mass, the sacraments, prayer, doing Gods will, the means to fight against our failings and grow in virtue. I would have finished off with the four last things, and the fulfilment of justification.

… A seminarian said, “We valued him a lot. We really loved him because he was very simple and direct”. Since he sang a little off key, Fr. Lefebvre asked one of the youngest seminarians who had a good voice to help him practice singing the Preface of the Mass. “he was always happy to see seminarians in his office, to speak, to say something that needed saying, talking in his small gentle voice”.

… Colleagues visiting Mortain were surprised by the mutual trust between the priests and students, a trust that enabled the students to act often on their own initiative. Such were the fruits of an understanding Father Superior. This was how Fr. Lefebvre conceived of the right relationship between authority and obedience. France after liberation was suffering from a crisis of authority brought about by the crisis of obedience among the Free French. Restoring authority’s real meaning meant showing its true face. The Father Superior led by example, and that was a language the seminarians could understand. One day he asked them to write an essay on authority, starting from a beautiful description of authority which he gave them but providing their own examples to illustrate their arguments.

“One can say that authority is totally divine in its origins, and sweet and powerful in its essence. And, if it is moved by the gift of counsel and supported by prudence, it is also amazingly fruitful, bringing order, prosperity and peace.”