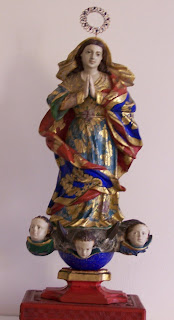 “Mary will keep us in the Catholic Faith. She is neither Liberal, nor Modernist, nor ecumenical. She is impervious to all errors and with even greater reason to heresies and apostasy”

St Thomas evokes the great privileges of the Virgin Mary when he speaks of the sending of the Word into this world by His incarnation. (IIIa q.27 to 30).Mary holds such a place in the realization of the work of salvation of humanity by the Word Incarnate, that she merits to be evoked in a very particular manner. If Mary, by her fiat, miraculously became the Mother of God, the Mother of the Saviour, she became by the very fact the Mother of His Mystical Body, that is to say of all those who live of the life of Jesus here below and will do so for eternity. She became Queen of Angels, and the terrible enemy of the devils. Consequently, we have become her children by Baptism, and we nourish ourselves of her Son in the Eucharist. She is truly our spiritual Mother.

This divine Motherhood procured for her unique privileges and, first of all, her Immaculate Conception and fullness of grace from the instant of her conception. She is the sole human creature to be exempt from the results of original sin. Another extraordinary privilege is that she is the Mother of Jesus, and remained virgin, before, during and after her childbirth. Nothing is impossible with God, as she was told by the Angel Gabriel. The infant Jesus left the womb of the Virgin januis clauses, without destroying her hymen. She did not suffer the pains of Motherhood. How many errors do we find on this subject in modern catechisms! She was thus made exempt from the slightest sin and every sickness, for they are the consequences of original sin. Finally her body not being susceptible to corruption was raised up and assumed into heaven. This is the privilege of her glorious Assumption. She is henceforward the Queen of Heaven and earth. She is also, thanks to her divine Motherhood, the Mediatrix of all graces which we are given. Her spiritual Motherhood is universal. If Jesus is the Head of the Mystical Body, Mary is the neck, as the Fathers of the Church say. Mary, being the Mother of the Eternal Priest, exercises a particular Motherhood with respect to all those who participate in Jesus' priesthood. May the Virgin Mary deign to form us into priests in the image of her Divine Son. May devotion to Mary be honoured in every house and chapel of the Society, and in all the hearts of all its members!

"Oh Immaculate Virgin, who by the extraordinary privilege of your Immaculate Conception, dost teach us all of the fundamental truths of our faith and hast merited to be the Mother of the Eternal Priest, form is us the Priest of Jesus Christ and make us less unworthy to participate in this Divine Priesthood"

From A Spiritual Journey written by Archbishop Marcel Lefebvre
Posted by just me at 13:32